Yes there抯 oil in the Gulf off Louisiana抯 coast as the cleanup continues following the oil disaster, but there抯 also fish, lots of hungry species as four leaders of the recreational-fishing community along with that state抯 governor found out earlier this month.

At the invitation of Doug Olander, IGFA Representative and Editor-in-Chief of Sport Fishing magazine, IGFA President Rob Kramer joined other leaders of the U.S.recreational-fishing industry and Louisiana Governor Bobby Jindal on an exploratory fishing trip off the coast of Louisiana, USA. In a national show of support for regional anglers, Jindal, Kramer and Olander were joined on their fishing trip by Center for Coastal Conservation President Jeff Angers; American Sportfishing Association President Mike Nussman; and Ted Venker, editor of the Coastal Conservation Association抯 Tide magazine. 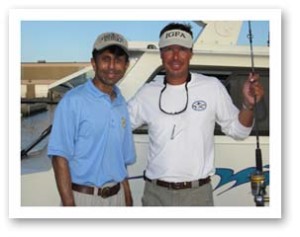 Since the Deepwater Horizon oil spill in April of this year, more than 35% of federal waters in the Gulf of Mexico had been closed to recreational fishing - coming at a high price to the thousands of people who make their living in the industry. Saltwater recreational fishing was reopened in the vast majority of Louisiana抯 state waters just two weeks prior to the trip. One of the objectives of the trip was to generate positive publicity for the state and its many businesses that rely on recreational fishing and to send a clear message that coastal anglers can once again get back out on the water with families and friends.

With coastal businesses still reeling from fisheries closures at the height of their busiest season, the group noted the importance of making whole the thousands of local businesses dependent on recreational fishing. In response, Governor Jindal promised to seek a timely resolution on reopening federal waters that remain closed to all fishing. Capt. Tommy Pellegrin of Houma, Louisiana, hosted the trip aboard his charter boat, Reel Life. After a 50-mile trip into the Gulf of Mexico beyond the closed area, Pellegrin put his clients onto hungry fish swarming around oil rigs. Indeed, the lack of recent fishing pressure seemed to make the fishing better than ever. Kramer said the anglers aboard the Reel Life caught several species of grouper and snapper, along with cobia, mackerel, dolphin fish and blackfin tuna.

While the fishing was spectacular, Kramer noted that 搘e still need to be cognizant of the potential long-term impacts of this disaster on the fishery. It is now more important than ever to increase research and monitoring efforts in the Gulf of Mexico?for the sake of the fish, and the people who rely on them.?

For more details on the trip please go to Olander?blog on the Sport Fishing Magazine website where Olander also has a link to a pictorial feature of what the recreational fishing leaders found.