This article describes the technique of the flutter kick in the front crawl stroke. It also covers common mistakes, kicking rhythms and some tips to improve your technique. 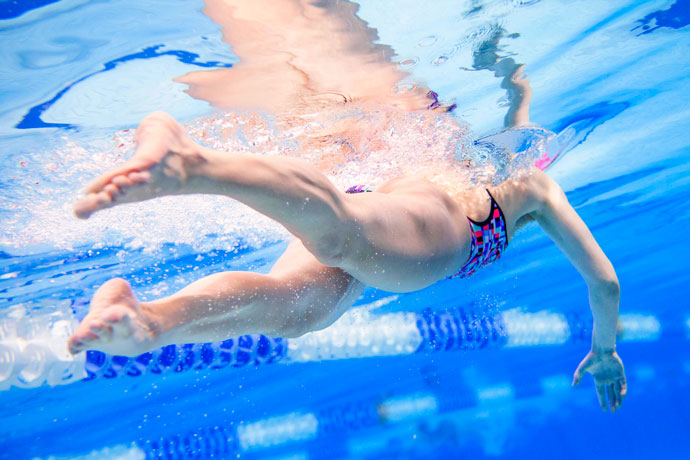 To get started, let’s have a look at a video that shows the freestyle kick in action during the men’s 1500 final at the 2004 Olympics:

As you can see in the swimming video above, the flutter kick is a simple and efficient kick used while swimming freestyle. Basically, both legs are kept parallel and quickly flutter up and down with toes pointed.

The first role of the flutter kick is to provide propulsion. It is a fact that world class swimmers have a powerful kick. So it is clear that the kick has its importance in fast swimming. However, it might be less than you think. In fact, studies have shown that the amount of propulsion provided by the kick in elite swimmers is only about 10%. The rest of propulsion is provided by the arm stroke.

The second role of the flutter kick is to stabilize the body. In fact, the start of the propulsive phase of the arm stroke always coincides with a downward motion of the leg on the same side.

Let’s now cover the flutter kick technique in more detail. The legs are kept parallel at all times and execute opposite movements: while one leg kicks downward the other one moves upward, and vice versa.

During the first half of the downbeat, the downward movement is initiated by slightly flexing the leg at the hip. Shortly after, the knee also bends a little bit. The foot goes in plantar flexion (toes pointed), both by muscle contraction and by the pressure of the water against the foot as it moves downward. During that phase, the top of the foot is oriented downward and a little bit backward. Because of this, while the foot moves down some water is in fact pushed back. That’s how propulsion is generated in the flutter kick.

During the second half of the downbeat, the hip is locked in place while the knee is extended. The toes are still pointed. This phase isn’t propulsive but prepares the leg for its upward movement.

There are two popular kicking rhythms in the freestyle stroke, the two-beat kick and the six-beat kick.

In the two-beat kick you kick once with each leg per stroke cycle. The downbeat of the right leg occurs during the propulsive phase of the right arm stroke (insweep and upsweep to be precise).

The two-beat rhythm is used by lots of middle and long distance swimmers because it uses less energy than the six-beat kick.

There are a few common mistakes in the flutter kick that decrease it’s efficiency and hence should be avoided:

In many fantasy baseball circles, there exists the notion that shortstop is the shallowest of