Why I Made My Kids Take Swim Lessons 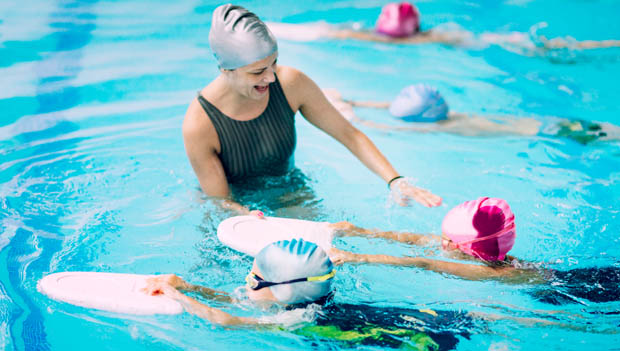 When it comes to extracurricular activities, I'm a pretty laid-back mom. I want my kids to explore their interests and try new things, but I also think at their age it's just as important to have fun. I have never demanded they participate in anything—except for swim classes.

From the time my kids were babies, I've had them in some sort of swim class. I started with one of those classes where you hold your baby (who's wearing a swim diaper that you pray will be up to the job), twirl them around in the water, sing some songs and call it a day.

When they were about two, I started focusing on the actual swimming part. We began with group classes at the Y, which they loved. In these classes, they played games and splashed around the shallow end under a big plastic tree that sprayed water.

My kids couldn't wait to go to the pool, but they still didn't know how to swim, which is a stressful stage to be in. Going to the beach with kids who are adventurous and love the water but don't even know how to float is not a good time for any mother.

When my kids were about four years old, we moved on from the Y and started taking group swim lessons at the local community center. These were, unfortunately, not as helpful as I had hoped.

When you have twelve four-year-olds and one overwhelmed swim teacher, you get eleven kids lined up on the side of the pool playing grab-ass while the twelfth gets their 30 seconds blowing bubbles in the water with the instructor. Again, my kids had fun, but they still didn't learn how to swim.

Then came the near-drowning incident.

My kids' class was taken out to five-foot-deep water and told to hold on to the edge of the pool while the teacher worked with them one at a time. Many of the other kids in the class could swim, but mine couldn't yet.

While the instructor was halfway across the pool with one kid, my son lost his grip. He went under. I waited for a second to see if he would grab hold of the ledge again, but it quickly became clear from the way he was thrashing around that he couldn't.

I don't remember getting up from the bleachers where the parents sat over to the side of the pool, but I was there in a second. The head lifeguard also ran over and called the instructor's name, which is when he saw my son, came over and grabbed him. We hoisted him out of the pool.

He was hysterical. I sat there with him in my arms on the pool deck and rocked him back and forth. After about 10 minutes, the lifeguard recommended trying to get him back in. I said there was no way I was going to do that unless they moved back to the shallow end. They did, and he bravely got back in the water.

I cheered him on for a few minutes, and then went back to the bleachers where I broke down sobbing, holding my son's towel over my face so he wouldn't see me cry.

I found a swim center that gave private lessons, with a focus solely on turning kids into swimmers. The first few times mine went they hated it. These instructors did not let them grab onto the sides or stand in the shallow end—when they needed a break, the teachers would flip them over onto their backs so that they could learn to float.

My kids would be asked to go from Point A to Point B in the shallow end. They would sink and they would cough, but they would get there. And boy, did they hate that. It was scary for them and not the least bit fun, but guess who didn't care? This mom. Because you know what's scarier and even less fun? Drowning.

Within a month, my kids could swim across the entire pool. And now, two years later, they love going to their lessons and can't wait to go swimming.

These lessons have not been cheap and the swim center is on the other side of town, but the peace of mind I got from knowing that my kids know how to float, swim and tread water has been worth all of it.

Swim class is the only activity I have forced my kids into without caring whether or not they enjoyed themselves. But as I learned when I saw my son struggling for air in five feet of water, swimming is one of those skills that shouldn't be optional for any child, whether you take them to private lessons or out to the local swimming hole. And while they may cry and complain, just tell yourself their tears will be worth it. It worked for me.

Related Articles
6 Tips for a Smart Triathlon Swim
4 Swimming Drills to Perfect Your Stroke
How to Make Your Camera Waterproof
Running for Swimmers
Why Technique Is Vital to Performance
Triathlon Swim: How to Stay on Course
4 Steps to a Smooth 1.5K Swim
Improve Your Fitness With Swimming
Why You Should Embrace Your Slow Swim Times

Athletes, including swimmers, should incorporate different exercises into their workout routin

To this day, San Diego remains the best city on Earth to be a triathlete. The running routes ar

The Pyramid of Open Water Success

John Wooden, the legendary UCLA basketball coach, is a great educator who created one of the mo