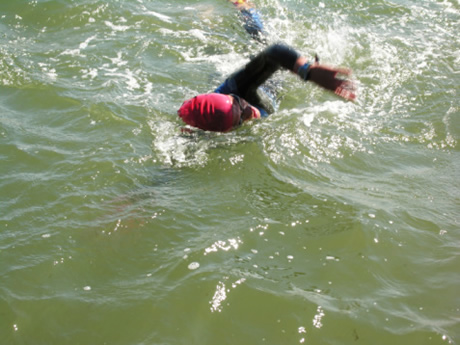 Openwaterpedia lists over 1,660 different words and phrases used in the open water swimming world. Like the specialized terms used in running, cycling and triathlon, an experienced triathlete and open water swimmer frequently incorporates these terms in their conversations, and this may confuse someone who is new to the sport.

Besides the standard words such as dolphining, feeding, pacing, positioning and drafting, here are a few lesser known terms:

Alligator eyes: position of the head and eyes of an open water swimmer when he raises his head slightly over the surface of the water and looks forward in order to navigate.

Beluga (slang): an athlete in the open water swimming community who weighs at least 200 pounds (analogous to a Clydesdale).

Channelversary: the annual recurrence of a date of one's channel swim.

Cap tan: the division on a swimmer's forehead between the skin of pronounced paleness relative to the rest of their face that has been suntanned by prolonged exposure to ultraviolet radiation in a pool, outdoors or in the open water.

Directional uncertainty: the lack of certainty about the optimal course or direction to take in an open water swim or triathlon swim leg. It's a state of having limited knowledge in a dynamic environment where it's difficult to know the optimal course.

Goggle tan: division on a swimmer's temple and around the eyes between skin of pronounced paleness relative to the rest of their face that has been suntanned by prolonged exposure to ultraviolet radiation in a pool, outdoors or in the open water.

Go to the gear: to grab one's hand paddles, pull buoys, snorkel, fins and/or kickboards after a hard main set in a pool workout or if the interval is too fast.

GWS drill: sprint and kick like a great white shark is in the water.

Hardening: the process of becoming acclimated to cold water.

Many Wrongs Principle: theory first proposed in 1964 that has implications for open water swimming. The principle predicts that swimmer cohesion can cause packs to navigate more accurately than single athletes making decisions independently. Group navigational accuracy is generally increased with group size and when individual directional uncertainty is high.

Open water hickey: an irritation or wound around the neck caused by chafing or wearing a wetsuit for an extended time while swimming.

Raccoon eyes: an extreme goggle tan where the swimmer's temple and skin around their eyes is of pronounced paleness relative to the rest of their face that has been suntanned by prolonged exposure to ultraviolet radiation in a pool, outdoors or in the open water.

Remora (slang): a swimmer who leaves right behind another swimmer during interval training set in the pool. It also refers to a swimmer who drafts very closely to another athlete throughout the entire swim. A remora often drafts right off the hip or lower leg, and shifts his position entirely depending on the navigational course of the lead swimmer.

Swim your age: a feat that requires a swimmer to swim non-stop, without a wetsuit, equal to the same or greater number of kilometers as their age. It's a difficult metric that becomes increasingly difficult as a swimmer ages.

More: 7 Swims to Do Before You Die

Tarzan swim:swimming with your head up.

The Certainty of Uncertainty Principle: a fundamental observation that the longer the swimmer is in an open body of water, the greater possibility and increasing probability that (a) adverse conditions will occur to make a swim longer, more difficult or impossible, and (b) marine life will appear.

Search for a swimming event.

Related Articles
How to Fix 4 Common Swimming Injuries
7 Open Water Swimming Tips You Didnt Know
The Science of Swimming: Expect the Unexpected
Acclimating Your Body to Cold Water
Should Triathletes Learn the Flip Turn?
6 FAQs on Ironmans New Swim Starts
How to Breathe When Running
Bring the Surfboard, the Body Will Follow
5 Fun Ideas for Summer Swims

6 Workouts for a Stronger 1.5K Swim

Strong does not mean bulky, big, or even all that muscular. Swimming strong is the ability to

Like almost anything youre learning for the first time, perfecting the backstroke takes a lot o

Men Vs. Women In Endurance Sports

Based on preliminary comparative research findings by Open Water Source, it was found that wome