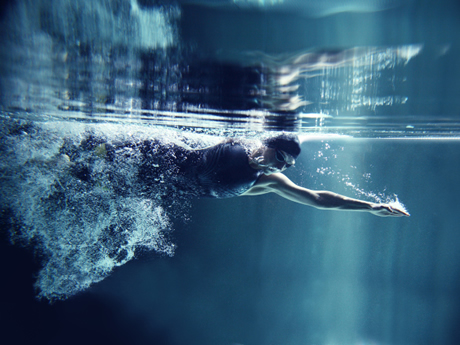 Triathletes have many challenges; dealing with misinformation should not be one of them. While there are numerous misconceptions about freestyle swimming technique, there are three technique elements that triathletes are often exposed to, and suffer because of.

Misconception No.1: The head is submerged to bring the legs to the surface.

One of the many misconceptions about freestyle is that the head must be submerged for the legs to stay behind the shoulders and minimize resistance (see Figure 1, left). Although lowering the head may help to raise the legs, breathing is more difficult because it requires excessive head motion that distorts the body position and increases resistance.

Instead, arching the lower back lifts the legs, brings the heels to the surface, keeps the legs behind the torso, and minimizes resistance. If the water level is kept at the swimmer's hairline (see Figure 1, right), a bow wave forms along the side of the head. Breathing is much easier because only minimal head rotation is necessary.

Misconception No.2: The catch-up stroke is a viable technique.

Research definitively shows that the catch-up stroke—where you keep one arm in a stationary position after completion of the entry as the other arm recovers, shown in Figure 2, left—is biomechanically ineffective, physiologically inefficient, anatomically stressful, and counterproductive from a skill-learning perspective.

The catch-up stroke is an ineffective arm synchronization that causes fluctuations in body velocity. In addition, holding the arm in position in front of the body and parallel to the surface reduces the space for the soft tissue between the upper arm and shoulder. This position causes irritation and decreased blood flow and is classically related to shoulder impingement. Torso rotation with this arm position further stresses the shoulder.

Immediately beginning the pull after completion of the arm entry provides a more continuous source of propulsion, a more efficient use of energy, and less "time of exposure" to shoulder stress (see Figure 2, right) when it comes to freestyle.

Misconception No.3: The forearm is positioned vertically as the pull begins.

If the elbow is flexed at the beginning of the pull, to position the forearm vertically, the hand moves laterally (to the side of the shoulder as shown in Figure 3, left). As force is applied during this motion, torque is generated about the antero-posterior (front to back) axis and the body twists (or the swimmer must kick sideways to compensate). Either option is disadvantageous in freestyle. In addition, the arm is weakly positioned for the push phase.

It is far more effective to diagonally orient the forearm as the pull begins by moving the hand from in front of the shoulder (at the completion of the arm entry) to a point directly beneath the head (as shown in Figure 3, right). The swimmer benefits from improved leverage on the pull phase and also has the arm in a stronger position to generate more force on the push phase.

Just because certain freestyle technique elements are popular, exhibited by top swimmers, or have even become conventional wisdom doesn't mean they are effective. The three elements listed above are prime examples. Fortunately, swimming science has progressed so that we now have considerable information to accurately evaluate technique elements.

Search for a swim class.

Related Articles
4 Swimming Drills to Perfect Your Stroke
Acclimating Your Body to Cold Water
Step Up Your Swim Workouts With a Pace Clock
8 Tips for Open Water Swimming Newbies
Swimming
Why Swim Pace Is Important
6 FAQs on Ironmans New Swim Starts
Open Water Swim Technique: Work Less, Swim Faster
Andy Miyares: An Inspiration in and out of the Pool

The first leg of an Olympic-distance triathlon is a 1500M (0.9mi) swim. This thrashing, white

Cyclists, race car drivers and open water swimmers all know the benefits of drafting and positi

The open water might feel freer than a lap pool, but that doesnt mean its an anything-goes kind