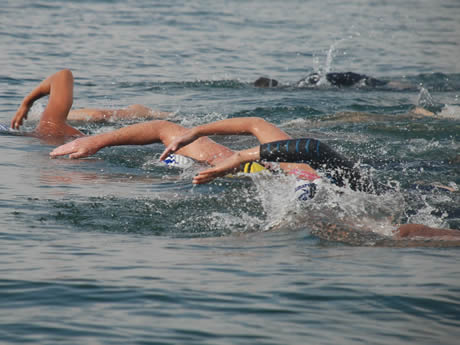 All swimmers recognize that open water presents challenges never seen in a pool. Rougher water and no lanes are the obvious ones. Less obvious is the considerable difference in energy cost.

Consider this: In a pool, about 20 percent of your time consists of breaks from stroking, while you push off the wall. In open water, there are no rest breaks for weary arms.

This calls for not just better, but different, open water swim technique. The little-recognized problem is that training in 25-yard or -meter pools, as most triathletes and open water swimmers do, encourages development of stroke habits that are likely to undermine your performance in open water.

In a pool, you generally swim just 20 strokes at a time. In a triathlon, you'll swim between 1000 (sprint) and 5000 (Ironman) uninterrupted strokes. Striving to swim your fastest in a pool workout may bring immediate gratification, but over the longer term, can limit your open water potential.

More: Psych Yourself Up for Open Water

Applying this lesson in my own practice led to unprecedented success in open water: When I turned 55, in 2006 I'd been a cut-no-corners distance swimmer for nearly 40 years. Though undistinguished in my teens and 20s, after age 40, I'd managed to win a few medals in Masters National events. But between age 55 and 60, I not only completed several marathon swims of 20+ miles, I also won six National Masters championships at distances from one mile to 10K, and set national records in the 1- and 2-Mile Cable Swims.

The most important change in my training was to de-emphasize speed in the pool, and rigorously avoid practice of high-turnover, power-oriented strokes.

For instance, during shorter repeats, while my Masters teammates sprinted with high-turnover strokes, often taking 20 or more strokes per length, I limited myself to 15 or fewer strokes, striving to imprint form I could sustain without fatigue for 2000 or more strokes. I was willing to 'lose' short training repeats to win in an open water event that might be months away.

The Perils of Pool Training

While few shared my reluctance to "sprint," a 2005 study by Jonty Skinner, Director of Performance Science for USA Swimming, suggested I'd hit upon the optimal way to train—in the pool—for open water.

Skinner decided to investigate why some elite short course (SC) competitors fared poorly in events held in 50-meter "long course" (LC) pools, as are the Olympics. When he compared video of SC and LC specialists, he discovered the best LC freestylers swim with longer, slower, "hip-driven" strokes. This style might generate a bit less speed in short bursts, but was markedly less tiring.

SC specialists used a "shoulder-driven" stroke that allowed higher tempos and increased levels of arm force. It allowed swimmers to generate more speed in short bursts, but was too tiring to sustain for very long. In a 50-meter pool where the time spent swimming between turns is over two times greater, the short-burst speed of the SC stroke was no match for the sustainability of the LC stroke.

I immediately recognized that the best style in a 50-meter pool would become hugely advantageous in open water and redoubled my commitment to the longer, less-hurried, stroke. Within a year, I began to experience success I'd never dreamed possible.

More: Does a Long Stroke Help in Triathlon Training?

If you'd like to be at your best in open water races, one way to do so is to defer immediate gratification of faster times on short repeats, or winning those 25-yard sprints against training mates, for long-term gain.

To help you learn the open water swim technique that converts slower strokes into faster swims, here are four open water mini-skills to imprint in the pool?and remember while racing.

The natural position of a human body in water is 95 percent underwater. When new swimmers experience that "sinking sensation," most respond by lifting the head and churning their arms and legs. I call this practicing struggle and it's the worst preparation for open water swimming.

The first step to developing a stroke that's optimized for open water is to feel and use the water's buoyancy. Swim 25-yard or -meter repeats with a focus on "hanging" your head until it feels weightless, and relaxing your legs to draft behind your torso. Lengthen your repeats only as long as these new sensations remain strong.

The simplest way to lengthen your stroke is to focus on using your arm to extend your bodyline. You'll still stroke back, but shift your primary focus to the hand going forward.

On each stroke do the following:

A high-swinging, forward-reaching stroke, common among swimmers in open water, places most of the load of propulsion on fatigue-prone arm muscles. But if your hand enters the water closer to your head, and at a steeper angle, you can tap into more of the energy generated by your weight shifts and body rotation.

These open water swim techniques may sound simple, but none come naturally or instinctively. You'll need to practice new stroke thoughts consistently and tirelessly, until they become habits. You should never push off the wall without choosing one habit to focus on. Just as important as new muscle memory is the ability to stay focused on any of them in the midst of a churning pack during a race.

Search for your next triathlon.

The Science of Swimming: Expect the Unexpected

Triathletes have many challenges; dealing with misinformation should not be one of them. While