The Importance of the First Touch 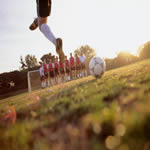 During the course of a game most players are limited in their number of possessions, therefore it's important to make the most of each opportunity. In this brief article I will be focusing on the often-overlooked first touch.

What first touch can do for you

Paying attention to the first touch will increase the player's ability to maintain possession, improve their speed of play, and allow them to be more successful at the higher levels. 'First touches' can be improved by planning things like where is the best place to go with your touch, how to take the first touch, which is the proper foot, how should my body be turned, etc.

Location of the first touch

Where is the best place to take your first touch? This space I call the "positive space" or the optimal space which allows the player more possession time. The positive space can be away from pressure, over pressure or by pressure. Players receiving the ball need to identify where the opposition is, where their own teammates are and how best to move the ball.

Seeing possible options prior to receiving the ball will give you the best chance to do this. Taking your touch out of pressure will give you additional time to make a better decision. Questions to ask yourself: Where is the pressure coming from? Where do I want to go? How do I want to take the ball and at what speed do I need to do it at? Do I need to change the point of attack? Do I want to attack the goal?

The process of receiving the ball into a positive space can be the difference between getting a good shot off and missing an opportunity altogether. At UCSB we stress the importance of receiving the ball with the downfield foot. When turned side on, with your back to the sideline, the downfield foot is the foot closest to the goal you are attacking.

In other situations receiving with the downfield foot can make your second touch a shot on goal or a dangerous cross for a teammate. A second type of touch we focus on at UCSB is the drop step. This is usually done in the center of the field and is used when the player is looking to change the point of attack, or go straight to the goal.

The drop step is done by starting half- turned and facing the goal you are attacking--with your body in an open stance. As you receive the ball let the ball role across your body to your second foot and guide the ball to the opposite side of your body using the inside of your foot. This will allow you to receive the ball from one side of the field and take it to the other side.

Learning how to receive the ball and how to find the positive space takes time and training in situations that force you to act. Our players enjoy a game called "flying changes." This game involves two-on-two with goalkeepers on a field 30 yards by 24 yards. The game is played continuously with a new ball brought into play as the old ball goes out of bounds.

For example: a new ball always starts off the right post. When a ball goes over the end line, the team whose end line was crossed then is given a new ball and end up replacing their two teammates--with the other team's two players staying on to defend. If the ball goes over the sideline, then four new players come into play, with the team who would have had a throw- in bringing the ball into play and now being put on attack.

This game is great for a number of reasons: it involves important skill sets such as two-on-two defending, decision- making in the attack, combining around the goal, finishing and crossing. We progress by adding target players and flank players to make it even more realistic and fun. This game puts players in pressure positions that force them to have a good "positive" first touch in order to get to the goal and be successful.

Outdoor Sports
Buying Those First Golf Clubs
50 Awesome Fish Facts & Tips
Be the Best in Your Golf Team through Best Dangerous Golf Apparel Offered Here
Tips That Can Make You Better At Golf
3 Ways to Improve Your Fitness Fast
Magazines For The Avid Mountain Biker
force plays...
What to Buy at Discount Hiking Backpack Stores
golfessentials.in is the one-stop shop for golfers offering quality golf equipment in India.

Some Reasons for Preferring LED Flashlights Over Ordinary Flashlights

How To Encourage Your Child To Learn New Things?