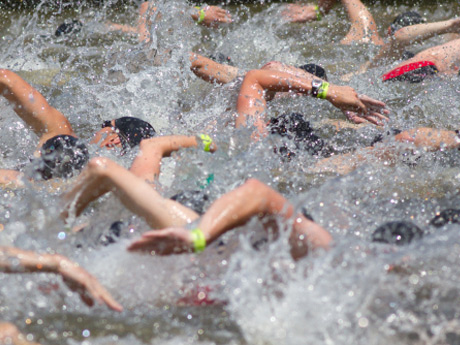 If you were at Ironman Coeur d'Alene or Ironman Lake Placid in 2013, you may have caught a glimpse at what could be the future of Ironman race starts.

At both of those events, a rolling swim start was implemented. That means athletes were asked to seed themselves according to their projected swim time, and athletes lined up in time to hit the water starting at 6:30 a.m. Due to swimmers starting at staggered times, starts were less hectic than they are at mass starts.

This method, announced in May 2013 as part of the SwimStart Initiative, replaced the mass swim start Ironman athletes are used to, where the cannon is fired and thousands of athletes start the 2.4-mile swim at the same time.

The rolling start at Coeur d'Alene and Lake Placid were meant to be merely a test run and nothing permanent, but the writing is on the wall that this is the direction Ironman could be heading. After the starts went smoothly at those two races, the inaugural Ironman Lake Tahoe in September switched to a rolling start about six weeks before the event.

"The rolling starts at the Coeur D'Alene and Lake Placid Ironman events have both received tremendous feedback," says Tim Johnson of Ironman. "I saw this new format for myself in Lake Placid and it was so nice to see athletes getting into the water with people of their own ability and start swimming smoothly. I can honestly say I have never seen as many people swimming in the same direction with significantly reduced contact. I believe we have really helped calm people's anxiety levels at these events, which has resulted in a safer swim and made for a more pleasurable experience."

Ironman traditionalists don't like to see the 140.6-mile test made any easier. And the rolling start does throw a wrench in a few Ironman traditions. But many athletes see the changes as necessary for athlete safety, especially as Ironman events grow in popularity and size.

Here are a few frequently asked questions about the initiative:

Why Did Ironman Do This?

The idea was to make the swim leg less intimidating, since a 2.4-mile swim is usually the leg that scares triathletes off. The early numbers back it up—in 2012, the Coeur d'Alene and Lake Placid events had a combined 84 swimmers fail to finish the swim or miss the 2:20 cutoff time. That number shrunk to 17 in 2013 with the rolling start.

By eliminating the mass start, triathletes now swim alongside participants closer to their ability level—and fewer of them.

The rolling start wasn't the only change made. Coeur d'Alene and Lake Placid also had anchored resting rafts for a swimmer to stop and take a breather if needed. The amount of personnel and rescue boats along the course was boosted as well.

How Do Athletes Self-Seed?

Volunteers at the swim start have signs arranged by projected finish times. At Ironman Lake Placid, there were seven different "corrals" for swimmers to choose from:

How Does Ironman Know When Athletes Enter the Water?

When entering the water, athletes will go under a swim start arch at the water's edge. Timing mats are underneath the arch, which will trigger the timing chip athletes will be wearing.

Yes, the swim course doesn't close until 2:20 after the last age group athlete enters the water. But if your swim time exceeds 2:20, you will be disqualified.

Is the 17-Hour Time Limit Still in Place? Does the Famed Midnight Cutoff Still Have Meaning?

Yes, the 17-hour time limit is still in place. And the midnight cutoff still has some meaning.

Swimmers begin to enter the water at either 6:30 or 6:35 a.m. (depending on the race) and Ironman officials expect everyone to be in the water no later than 7 a.m. If that's the case, nobody would be able to finish both after midnight and under 17 hours.

However, it is now possible for an athlete to finish before midnight and still be over the 17-hour limit. If that's the case, the participant would not be recognized as an official Ironman finisher.

More: What to Do When Things Go Wrong at an Ironman

Is Every Ironman Race Going to Do This?

So far, these changes are only being tested in North America, and only at certain events. In 2013, only Coeur d'Alene, Lake Placid and Lake Tahoe are doing rolling starts. Ironman Florida will have a mass start based on self-seeding in different corrals to put athletes among other similarly skilled swimmers. Ironman Mont-Tremblant in Quebec will feature a wave start based on age group (eight waves starting five minutes apart). Ironman will assess the success and feedback of all three of these methods before implementing any of them in 2014 and beyond.

Texas, Wisconsin, Arizona and Canada will continue to have mass starts. The Ironman World Championships in Kona will also have a mass start.

Here's a video of the rolling swim start at Ironman Coeur d'Alene:

It is unfair. It is frustrating. It is cheating. So goes the thought process of some open water

The Science of Swimming: Expect the Unexpected